RSA may no longer be as strong an encryption algorithm as ECC, but there are some things that can be done to make it very resistant to hacking.

At the same time, the main part of the data can be encrypted by the "built-in" software of the Android OS using RSA.

Very curious if anyone can hack the following text: "tyubbgh,llet5gcghu8jhxwrtred9lmjnvvtr5gg4dwelmmb75"

And all because the text was "masked" without using any logic. Randomly selected bytes were replaced by others. And the replacement option is known only to the receiving party. Those. the text was encrypted and deliberately corrupted.

It can be either text or a decryption key.

The problem of the stability of any encryption algorithm is the complexity of the logic used. And if there is no logic in the data initially, then it cannot be decoded directly.

Popular posts from this blog

April 30, 2022
Android Source Code Here is a complete Android Java photo recorder project with FTP client. The project includes all the necessary libraries and comments. The app is fully compatible with Android 10 and above. A PDF manual has been added to the project. The application consists of several modules and can be easily upgraded. This is an Open Source GNU GPL project. You can create your own versions of the application and sell them. The author does not need to pay any money. You only need to indicate the Copyright of the source code. You can use this application to create commercial projects of any size, for employment or to obtain a residence permit (as a programmer). The next Open Sorce project OFLAMERON is currently being prepared for publication. Open Source Project in ZIP   https://drive.google.com/file/d/1hAeNqKd-3nXiMhk_t41p4bXXOuE3kcWH/view?usp=sharing Android Source Code
Read more 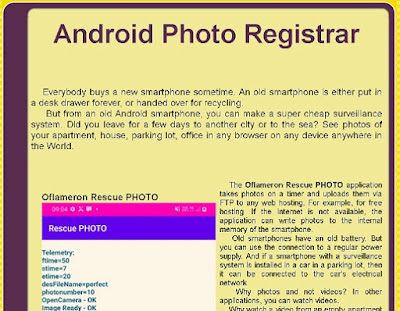 Photo Registrar      The site oflameron.com hosts a repository in which the source codes of the application OFLAMERON Rescue Photo will be published. Any Java programmer can analyze Java code and suggest ways to improve it. If the proposed code is added to the application OFLAMERON Rescue Photo , then the author of the code fragment can be indicated in the Copyright.        Interesting suggestions include saving settings to a webserver, downloading new settings from a webserver, managing settings via SMS messages, creating applications for other versions of the Android OS, using a microphone for activation, etc.        These proposals are connected with the author's decision to start work on new programs for control, surveillance, security, protection, alibi provision, etc.         Application OFLAMERON Rescue Photo fully performs all the functions for which it was created by the author. The disadvantages of the program are known: the application setting is not intended for
Read more